Social prescribing, where patients are referred to non-clinical activities, is producing positive outcomes. But can the voluntary sector keep up with demand? 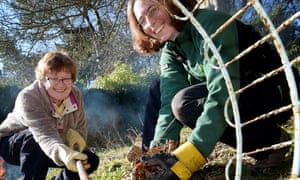 The Branching Out programme in Scotland uses the outdoors to help people build up their confidence. Photograph: Jane Barlow

Group therapeutic work had never appealed to Kerina, who was diagnosed with borderline personality disorder and obsessive compulsive disorder in her 30s after suffering from mental health issues all her life. “You sit there reading paperwork and it feels like you’re in a classroom,” she says.

Then two years ago the community mental health team in Mid Ross in the Scottish Highlands gave her a “social prescription” – referring her to Branching Out, a Forestry Commission Scotland programme designed to help people recover from long-term mental health problems. For 12 weeks she spent five hours a week in the woods doing conservation work, bushcraft and environmental art.

“I enjoyed it straightaway,” says Kerina, who now volunteers as a mentor with the Abriachan Forest Trust, where she completed the course. “It’s so different from your normal life. You go out there and all your worries leave you. We built shelters, tables, workbenches, a kitchen. We chopped wood, we cooked, we sat around the campfire.

“It just seemed to really work for me. I remember saying: ‘I feel like I’ve been here for ages.’ I’d only been there a day.” Though she still has good and bad days, she says she now finds her problems easier to deal with, and is working towards a formal award in volunteering.

The use of social prescribing – where GPs and other primary care professionals refer patients to non-medical activities, such as gardening, arts and sports, normally delivered by the voluntary sector – is growing, with many schemes tackling mild to moderate mental health problems. Studies have suggested a range of positive mental health and wellbeing outcomes.

But in January a report commissioned by Natural England warned that the lack of a standardised referral mechanism, or funding for the activities offered in the majority of services, posed “fundamental barriers” to the NHS’s ambition to increase the scale of social prescribing.

It identified Rotherham’s service for people with long-term health conditions, which started in 2012, as having many of the ingredients for good practice – including a simple and effective referral system, well-informed link workers to help patients choose an intervention, and, crucially, funding for those interventions.

The report also highlighted the service Rotherham has since started for people with mental health issues, which began as a one-year pilot in 2015 and has just been extended for a third year. In an evaluation of its first year, 93% of service users reported progress against at least one of eight wellbeing outcome measures, and 64% reported progress on four or more.

While the service initially focused on those who had been using services for five to 20 years and needed a support network and meaningful activities to help with a successful discharge, it is now expanding to work with people earlier on.

But Janet Wheatley, chief executive of Voluntary Action Rotherham, which coordinates the programme, backs up the warning in the Natural England report: “You can’t direct more and more people to use resources in the community without providing funding to support that.”

Looking after your mental health as we come out of lockdown